Puerto Escondido (‘hidden port’) is located in the state of Oaxaca. The little town is beautifully situated on the Pacific Coast and known as a true surfing mecca. This is an increasingly popular beach destination and has its own airport, making it easy to get to too. The sea is heavy on Playa Zicatela and it is really fun to play with the brutal waves, but it is a bit dangerous, to be honest. Of course, I did and survived. This beach is much more known as one of the best surf spots out there: competitions are regularly organized here, which attract surfers worldwide. Around this beach are most restaurants, bars, and other entertainment venues.

But if you are just a regular, you better go to the incredibly beautiful Puerto Angelito, Playa Carrizalillo, or Playa Punta. Those are in Puerto Escondido, but of course, you can visit more beaches in the surroundings, like Mazunte or the nude beach of Zipolite. In between you will come across the Laguna de Ventanillas, full of crocodiles and iguanas.

The little town of Puerto Escondido

We are in the state of Oaxaca. Between this fantastic city and Puerto Escondido it’s only 139 kilometers, but prepare yourself for a hell of a ride: there are some huge mountains in between and it will take you about seven hours. There are direct buses to Puerto Escondido, or you will have to change trains in Salina Cruz as we did. We were on the road for 12 hours, so let’s not call this a tip. That airport might be a better idea after all.

Puerto Escondido is a lovely town, where everything is focused on the beach, surfing, the fishing trade, and gradually more and more on tourism. Of course, it is nice to go with a boat and spot turtles, dolphins, and even whales (in season) up close. The town itself is home to a number of nice hotels and restaurants, but if you really want to chill on the beach, go to Puerto Angelito.

From the entrance of Puerto Angelito, it is still a short walk to the beach itself, but the views here make up for everything: this beach is amazing. The prices are the most friendly: if you spend at least 300 pesos, you can lie on the sun loungers in front of the beach tents. The beers are about 35 pesos, which is slightly more than a dollar. The food is delicious and also with very friendly prices. So is Puerto Escondido expensive? Not really! (Well, not yet.)

Our Residence in Puerto Escondido

There is a wide choice to stay in Puerto Escondido. We ourselves slept in Bungalows El Maguey and that was more than a fine place to spend the night. We had a very relaxed breakfast at the nearby Piedra de la Iguana, where you get good portions for little money. Then you are already at the boulevard and you can go in all directions. An absolute must for diner in the evening is unmistakably La Olita Zicatela. Incredibly tasty tacos and other meals, with amazing fish.

The beaches of Mazunte and Zipolite

Nice to visit from Puerto Escondido are the beaches of Mazunte and Zipolite. You could say that these are just some beaches a little further away, but they all have their own charm. On the way from the town to these beaches, you will come across some hidden beaches. We went to a beach but were stopped by the army: turtles breed here. Forbidden for tourists, so also for us. So I can’t give you that tip. Zipolite is known as Mexico’s only nudist beach. This has traditionally been a real hippie beach, but of course, nudists have now also embraced this beach. Not bad, the atmosphere is still cozy and pleasant.

You will also encounter the Laguna de Ventanillas on the way and that is an absolute must. Crocodiles and iguanas grow here in a very protected environment. You park at the entrance, pay your entrance fee and walk straight through the woods towards the water, to the boat. First, you see a few breeding buckets, with young crocodiles.

With the boat, you sail across the lagoon and will encounter a lot of animals there, such as birds and the reptiles already mentioned. When you go ashore you will see a number of adult crocodiles that you can see up close and that is being fed. Then you walk into a field, where there are tens or maybe hundreds of iguanas. You can feed them and the critters come happily to you. Spooky? No, iguanas are beautiful and won’t harm you! A number of monkeys and deer in captivity also live here, which is a little sad, according to me. Just like a monkey-like that doesn’t have to show his butt to me, like in the picture.

The bioluminescence in The Laguna de Manialtepec

On the other side of Puerto Escondido is Laguna de Manialtepec. Here you will find bioluminescence in the water, the emission of light by plankton. This was perhaps the most spectacular tour ever for us: while the sun was shining in Puerto Escondido (with, admittedly, some dark clouds in the distance), it started to rain lightly on the way to the lagoon.

Once there, the storm broke out. The boat went into the lagoon anyway and in the middle of the lake we were allowed to swim between the plankton, while it was raining hard and the storm was raging. The water is warm (and sometimes it is too hot. The water comes from hot springs, so pay attention to that), so that’s not the problem, but is it completely justified? Not sure, but maybe that’s the beauty of it. The plankton did not try as hard because of the rain, but it was definitely visible.

After fifteen minutes we had to get back on the boat because it became irresponsible. A loud bang and all the electricity around the lagoon went out. Completely dark! You can imagine that there are no photos of this tour. It was strongly advised not to bring your phone or cameras with you and luckily: by the end we were soaked and pictures of the plankton had certainly failed. So take my word for it: this tour is worth it. On the way back it turned out to have rained in Puerto Escondido as well. The roads had become streams, water pouring in from all sides.

Puerto Escondido is also an area where a huge number of turtles live and they are protected by various foundations. Eggs are collected, the turtles are given space and an attempt is made to let them reach full maturity. Vive Mar is a foundation that ‘wants to give life back to the sea’. The tens of thousands of eggs laid by turtles on Mexican beaches each year are collected by foundations like this one. Give these eggs the rest to really hatch.

Otherwise, at most one turtle in a thousand will survive, we are explained. That figure is questionable. Internet sources are talking about one in a hundred. Still little and it is also mentioned that it is also becoming less and less. So a kind of protection. Enthusiasts, tourists, or anyone else can adopt a turtle. Costs you 100 pesos (about 4 dollars) and then you can release the reptile. It’s called Liberación de tortugas. And that makes me feel grateful. And a competitive feeling, you want your turtle to survive.

No fewer than seven of the eight sea turtles in the world are washed up on the Mexican coast. This is where they lay their eggs. The reptile digs a hole and lays its eggs in it. Two months later, the young dig their way up. That is the natural process. But yes, there is a danger: (mainly) people, iguanas, crabs, and birds lurk. Artificial light is particularly disruptive and more and more hotels are being built on the coastline. Not to mention pollution and waste.

And in the longer term, climate change and the associated problems – severe storms, beach erosion, other sea currents – is also a danger. The only thing you can do as a tourist is to be aware of it. Pay the 100 pesos and contribute a little. But consciousness seems to be the most important. Leave the turtles alone and let them live. Don’t eat turtle eggs, don’t take them home, and have some respect for life. 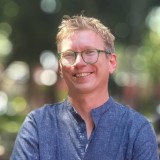